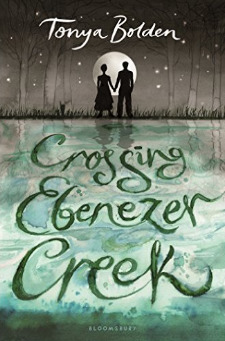 Based on a true story, Crossing Ebenezer Creek was the civil war book that I have been looking for and dreaming about all my life. The main audience for this book is middle grade, or ages 11-14, but I think anyone interested in the topic and up for a little first love horror tragedy, then you should dive right in.

This is an individual telling from the point of view of a group of slaves freed by Yankee soldiers. After being freed from their cruel master, they join the march on, eventually to Savannah, GA. Mariah and her brother Zeke, both slaves, jump in with hot Caleb, also a black man but a free one, driving a wagon for the Union. This makes for a grim backdrop for a love story but the author pulls it off, and for the next couple weeks Mariah and Caleb heartbreakingly begin to dream about what it would be like for them, together, after this is all over.

There were many times during this story that I honestly had tears in my eyes. What they endured!! The descriptions of what the treatment of slaves was like, however brief, were still breathtaking, and not in the Grand Canyon kind of way. To know that people treated other people the way they were treated, that their lives were actually owned by someone else, it is still so saddening even when knowing it beforehand. Her story was sad and violent and I am 100% sure very common.

Since I had no idea what had happened at Ebenezer Creek, I went in not knowing and was blindsided by the end. There was so much foreshadowing in the story though, there was no way you couldn’t guess something ominous was coming eventually. In the end it was hot Caleb that I thought about as I lay away after finishing the book. The amount of suffering in this book is tremendous.

The two main characters, almost star-crossed lovers, force you to instantly fall in love with both of them. As a reader I found myself hopeful for them in this crazy and contradictory times in their lives. So happy to be freed from slavery but knowing that the enemy is hot on their tail, not knowing if that could all come to an end in any instant. These characters had never had any hope before, and here they are wait for it to be taken away, like some cruel joke where the rug is jerked out from underneath you.

Honestly the only thing that I didn’t like about the book is that the characters had accents, and the author wrote in the accent, even when the character was thinking. Sometimes I had to sound things out in order to know what they were talking about. Some may find that a deal breaker but it wasn’t for me, because those places weren’t abundant.

This book is what I personally call a “gateway” book, one that has you asking Cortana things that you don’t know about and then looking up other books that are related and adding them to your groaning TBR.

I hope that kids will read this story in school, first love and a horror story, history and a tragedy, all rolled into one great yarn. 4/5 stars.

I was given this book for free in exchange for a honest and fair review. Thank you NetGalley for the opportunity!